Creeping ever closer to Halloween, we welcome you to have a seat as we present our third edition of the Advertising Hall of Horrors. In case you missed them, here are Part 1 and Part 2 in the series.

Now, pull your chair closer to the fire. Would you like a cigarette? No? Wise choice. For after these ads, you will never wish to have another again!

We step back into the dark reaches of our mind to explore ads from just a generation or two ago, but oh how much has changed! Let’s start, logically enough, at the beginning. The very beginning, with a baby appearing in…

Yes, before the days of the 70s Marlboro man, Marlboros were targeted toward women. And unbelievably, babies were featured in some of those ads as the early Marlboro man. Unsettling indeed.

But the cigarette companies didn’t stop there. Another lovable figure was called in to help the babies sell a few smokes. Recognize this guy? 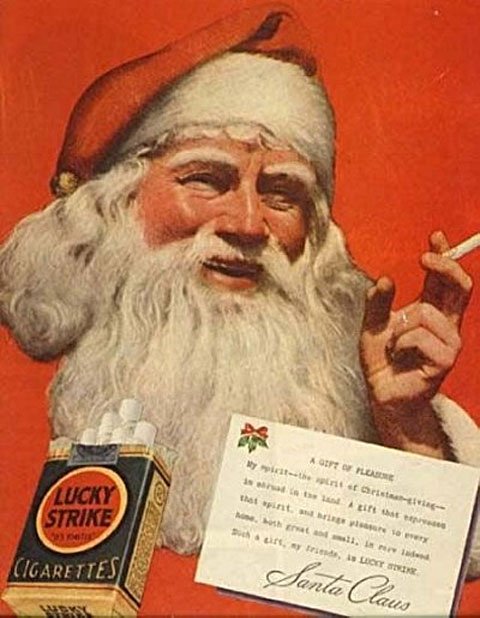 Santa has no doubt long since kicked the habit, but back in those days he had no qualms at all about handing out cigarettes as gifts. Check the note he lovingly left…

“My spirit — the spirit of Christmas-giving — is abroad in the land. A gift that expresses that spirit, and brings pleasure to every nose, both great and small, is rare indeed. Such a gift, my friends, is LUCKY STRIKE.
Santa Claus”

Think things couldn’t get much worse? The cigarette industry was just getting started. As news began to spread of the health risks associated with smoking, the cigarette industry took the only morally responsible route… responding by encouraging you to smoke anyway! First, the subtle insinuation that hey, if doctors smoke, cigarettes can’t be that bad… 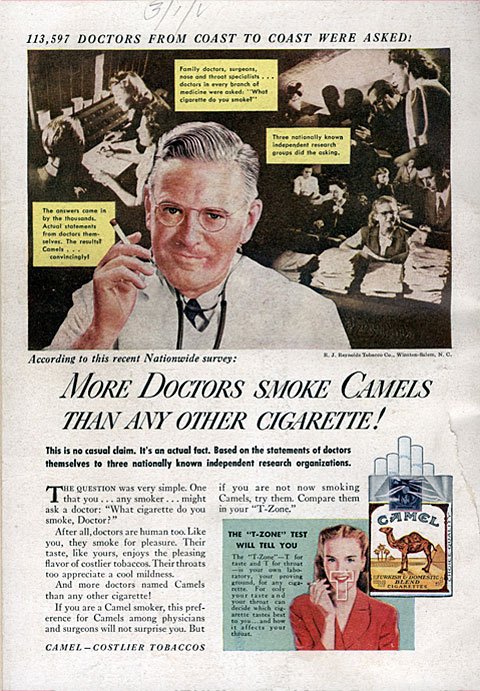 Okay, maybe the ad doesn’t actually say that doctors recommend you smoke, but it comes pretty close. How about this:

“Family doctors, surgeons, nose and throat specialists… doctors in every branch of medicine were asked: “What cigarette do you smoke?”

The ad then goes on to say that the answer, “convincingly,” was Camels. No mention of any of them not smoking or recommending that their patients don’t. Maybe those answers just got overlooked.

The text then goes on to read, “If you are a Camel smoker, this preference for Camels among physicians and surgeons will not surprise you. But if you are not now smoking Camels, try them.”

And finally, even though we’re close to wrapping up this visit to the Advertising Hall of Horrors, cigarette manufacturers were nowhere near finished yet. If anyone had heard by this time that maybe they shouldn’t smoke, there was this reassuring word from people you could trust… 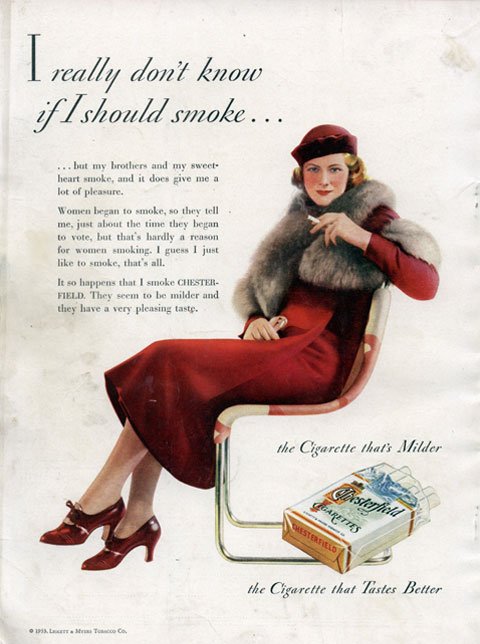 Corporate advertising seldom sunk much lower than it did with this ad. “Women began to smoke, so they tell me, just about the time they began to vote. but that’s hardly a reason for women smoking. I guess I just like to smoke, that’s all.” There’s that subtle suggestion that gaining the right to vote might somehow also give women the right to smoke. How could any woman who appreciated her hard-fought freedoms not want to smoke? It just wouldn’t be patriotic to refrain, would it?

So there you go… truly horrific ads that no doubt did contribute to untold health issues and early deaths. Thankfully, we’ve come a long way, to quote another oft-used ad line from cigarette ads aimed at women in the 1960s. Across North America, cigarette advertising is now banned in most of the places where it was once a firmly entrenched fixture. Still, even as a member of the advertising industry, I can’t help but believe that if legislation had not been put in place to ban such ads, we’d still be seeing them today.

What do you think? Did we miss any cigarette ad that you remember as being particularly nefarious? Add your comments… your opinions are like a breath of fresh air.

“His strategy and sales work got us into the doors of some top-name companies.”

“Lorne wrote our marketing strategy and then represented our brand-new company, which had no initial reputation, contacts or networks, in extremely competitive new markets across the US. His strategy and sales work got us into the doors of some top-name companies.

“We also found real value in Lorne’s design work on our brochure and Web site. Several prospects told us that we had a lot more credibility than they would have expected from a start-up, thanks to those presentations.”