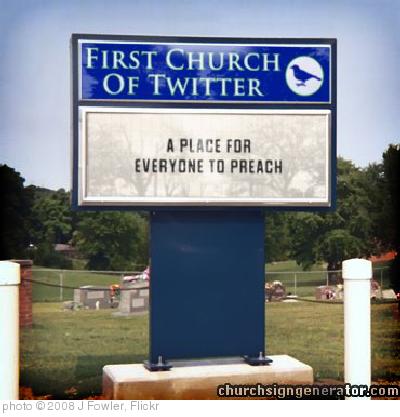 You’ve been hearing about social media. You’ve caught on to Facebook, but Twitter is still a mystery. Is it really worth checking out? You may have even gone to Twitter.com and poked around. Looked pretty dumb. Nothing going on, and no obvious way to make things happen. What is this stuff?

While Twitter can indeed seem unimpressive at first, it’s actually pretty easy to be sucked up into the Twittersphere once you give it a try. But to make that as easy as possible, it’s good to have a grip on the most basic terms. Technically, you don’t need to know these, but things will be a lot less confusing if you understand the few key words that get used a lot. So make an effort; as usual, it’ll mean less effort later. Seriously. Five minutes and we’re all done. Ready?

What on Earth is “Twitter” anyway? Do you send texts on your phone? Did you at least understand that question? Then you know what Twitter is. It’s just sending those 140-character text messages by computer instead of phone. Actually, you can even tweet by phone… if you have an app for that.

Tweet: It’s the act of sending a text message on Twitter, or else the message itself. Cute, huh? But don’t say you’re tweeting a tweet. That’s repetwitious.

@: When you send someone a text message, you send it to their phone number. When you tweet someone, you send it to their Twitter name, which is whatever name they created when they signed up,with an “@” stuck in front of it. No space in between. If you haven’t chosen yours yet, good luck finding the one you want. There are 200 trillion people on Twitter, and probably as many bots. Each one takes up one more username, so the perfect name is getting pretty hard to find. You’ll get a pretty good one though with a little bit of thought. Just keep it as short as possible; that limit of 140 characters per message will get eaten up pretty quickly.

Bot: It’s just an automated Twitter account. Short for “robot,” because everyone knows a five-letter word has to be shortened. Usually a bot will automatically follow a whole bunch of people on Twitter, unfollow any after awhile that didn’t follow back, and send automated tweets on a given topic. A lot of bots will continuously search for tweets that contain their target words, and will then tweet the people who sent them. Bots can be very spammy, and some just mean, although many can be quite useful or at least support some very good causes. It’s not always easy to know whether a tweep is a bot or a peep — see, you’re learning! — but you’ll get better at it as you tweet more and more.

Retweet: See someone else’s tweet that you like? You can repeat the tweet to get the word out there even more. Either click the Retweet button, or if you like to do things old school, copy and then paste it, along with that person’s username. For example, if you see this on your Twitter screen:

it means that I — my username is @lornepike, in case you hadn’t figured that out yet — have just told the world that I’m writing a blog post.

If you want to pass that along to everyone who follows you, you can retweet it as:

Now everyone who follows you will see my tweet. You’ve spread my message further than it would have gone on its own. You can also add your own comments, giving it your own personal twist, and someone else may retweet it again. And someone else again. Each time anyone retweets your message, it can be seen by everyone who follows that person. If enough people spread your message, people say it’s gone “viral.” Sick.

Hashtag (#): You thought it was called a number sign, didn’t you? Not any more. Now it’s a hashtag, and it makes it easier to keep track of all tweets about a topic or event. Huge Satriani fan? Add #satriani to your tweets about him, and they’ll be found more easily by anyone following that hashtag. Anyone can make up a hashtag any time they want. Some do it just for fun, as in #twitterseemsdumbatfirstbutnowithinkimgettingit. Many are very useful though, and can be a great help in following an online conversation. Check out TweetChat for lots more information.

DM: This brings us to a very important point. Everything you say to anyone on Twitter is completely visible to everyone else in the world. It’s like talking to Perez Hilton. If you prefer more privacy, you can send a Direct Message (DM) that only that person will see. However, someone must be following you before you can send them a DM, and due to the horrific number of automated DMs being sent by bots and even by real people, more and more people no longer check their DMs as regularly as you might like.

URL shortener: A URL is a Uniform Resource Locator, or Internet address. It’s the line that usually starts with http://www. The problem is, with only 140 characters per tweet, most URLs are too long to use on Twitter. Remember my tweet about writing a blog post? Let’s say I wanted to give everyone a link to the post. I could write this:

But that’s not going to work. I’m way over my 140-character maximum. So I can just go to URL shorteners like bit.ly or goo.gl and enter my URL there. They’ll give me back a much shorter version that I can now use in my tweet. The result?

There you have it: you now know the basic terms you’re most likely to see on Twitter. Are you a tweep already? Say hi to me on Twitter. And if you’re not, what’s been holding you back? Let me know your twestions in the comments below. I’ll let you know my answers.

“from well below 200th in Google… into the top five”

“In 2009 we knew the Internet held a lot of potential for us, but we didn’t know how to get started. We contacted Lorne and were impressed with his understanding of how to move us forward. His social media and SEO work started generating positive results almost immediately.

“We have since climbed from well below 200th place in Google’s search results into the top five for several targeted keywords, and also now have Newfoundland and Labrador leading real estate page on Facebook. The best is yet to come, and we trust Lorne’s social media marketing to help us get there!”