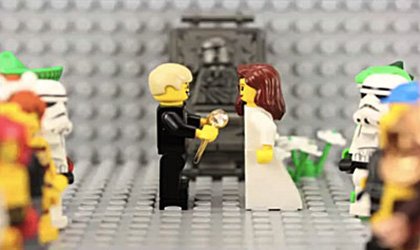 There aren’t many moments in life more notable — and either more fantastically rewarding or mercilessly soul crushing — than the marriage proposal. It’s a time when you want everything to be just right, in the hope of getting the perfect answer. So the last thing anyone would ever want to do would be to add elements that would make it more likely to end in disaster. Or so you’d think.

Us guys are not necessarily known for being relationally savvy. Still, there are certain elements of romance traditionally associated with a proposal that you’d think we’d realize are not necessarily present at a basketball game. Maybe that’s why a center-court proposal during an NBA game just seems less likely to succeed than a half-court free throw…

There’s already lots of pressure and a lifetime of imagining wrapped around that moment. Chances are good that a television audience, thousands of people all around you cheering and catcalling as they watch for your reaction, and the smells of popcorn and beer were not among the details that the bride-to-be imagined. Even once.

Contrast that with this Lego character marriage proposal that Atlanta filmmaker Walt Thompson put together to woo his girlfriend, Nealey Dozier. It’s cute, romantic, and best of all, it allows the other party to make a decision without the pressure of a TV audience, a microphone, and the guys in the back shouting out, “Get on with the game!”

Social media can expose your every moment to the world. But some moments are still best lived privately. And even if your social media foray is a strategic marketing campaign that’s got the boardroom’s full backing and budget, make sure you’ve got agreement among the main players before you put it out there for the whole world to see.

So, coming back to marriage proposals, how about you? Would you propose on TV or in front of a crowd? Would you want someone to propose to you that way?

“straight-up, customer-focused person with incredible insight into the needs of his customers and the ideal solution for them.”

“When I first interacted with Lorne through email, I was so struck by his insight that I had simply had to meet him (and with my calendar, you have to really stand out to get on it that easily). I was glad we were able to connect. Lorne is a straight-up, customer-focused person with incredible insight into the needs of his customers and the ideal solution for them. He is incredibly transparent and honest – there is no “slick sales schtick” with this guy. Many people who reach a certain plateau assume they have everything they need and at that point, they stop growing – Lorne is the complete opposite of this.

“In addition to his sharp business acumen, his strong desire to network and collaborate and his positive outlook, he also puts his family as a priority. In my world, that puts him ahead of many people I work with and makes him someone that I WANT to work with. I prefer to surround myself with people of strong worth ethic and values and Lorne epitomizes this. I strongly recommend Lorne to anyone seeking a VERY sharp, customer-focused business guy who demonstrates honesty, integrity, transparency and respect for every person he comes in contact with.”