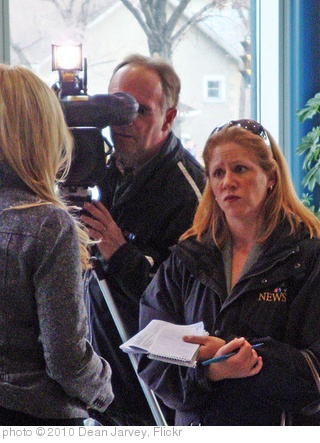 A core element of media training is to be prepared. There is no such thing as an unforeseeable crisis.

When companies or organizations ask me about media training, they’ll sometimes say they need help getting the media off their backs. I can hear the frustration in their voices. “The media is twisting the facts,” they say, “And we need to know how to make things better. A lot better. Now!”

Every  time — yes, every single time — I have then met with those companies, we were able to identify within just a few minutes of chatting a number of events that led to such an unhappy situation. Invariably, the sequence went something like this:

Now, any of us can look at that sequence and say, “Of course they didn’t get the coverage they deserved! They didn’t give the media their side of the story.” Even the execs themselves recognize that when they look at it in retrospect. But in the heat of the moment, with emotions running high and all deflector shields up, such decisions are easy to make, and even seem prudent. Only later or with proper media training does the illogical nature of such moves become obvious. And if this situation has happened repeatedly for years, the distrust between the company and the media can run extremely high on both sides.

The good news is that, even after such a debacle, companies can generally get things back on track and get their story out there… if they’re willing to be humble enough to genuinely learn from their media mistakes and turn things around. The even better news is that they never needed to get themselves caught in that downward cycle in the first place. And neither do you.

Be prepared for the media.

One of the core elements of media training is to be prepared. Believe it or not, there is no such thing as an unforeseeable crisis. Every single situation that is likely to surprise you can actually be imagined and addressed before it occurs. In fact, 95% of the crises or serious challenges your company will ever face will almost certainly be some variation of six or seven general scenarios. Even one hour with your management team to brainstorm possible crises can yield a pretty concise list of situations that are likely to ever darken your doorway. By collecting them into similar groups and then identifying immediate actions that would be needed for each, you can considerably heighten your readiness for whatever your worst day may bring.

In the meantime, remind yourself that no matter how high the heat may be, the media is not “out to get you.” They are ultimately looking for a good story, and neither they nor you would be well served by their generating stories that ultimately are proven to be false or poorly researched. Having your facts straight and easily accessible will do wonders to make it a much more productive call for your company as well as the reporter.

To ensure an even higher level of readiness, consider professional media training for you or anyone in your company who will be in contact with the media. Having the chance to address contentious issues and then assess your performance on video can bolster your confidence in speaking with the media and empower you to present your company in a much more positive light.

Regularly remind your employees and management team that any media inquiries are to be referred to you or the designated media contact. Make sure that contact information is easily available to anyone who is regularly at a company phone or front desk or email account.

Finally — and this is a point that many companies miss — keep your staff and key stakeholders informed of any media contacts before your statements hit the media, and be honest and consistent. People should never hear news about their employer from the media first, and should never hear one thing from you but something different from the media.

Media relations is not so much about handling the media as it is about handling your own level of preparedness. The more you can quickly respond to a media request by supplying them with accurate and clear information, the more you’ll find your company’s time in the spotlight can truly be a good news story.

“There was a clear level of strategic thinking and creative energy that went into every stage of each project, and both projects were delivered on time and on budget. We received an excellent return on our investment and his work ranked among the highest caliber and most effective communications products delivered to our Department in many years.

“Lorne’s marketing and public relations expertise was second to none, and his work exceeded our expectations, which have often been characterized by external consulting firms as exceedingly high and demanding.”