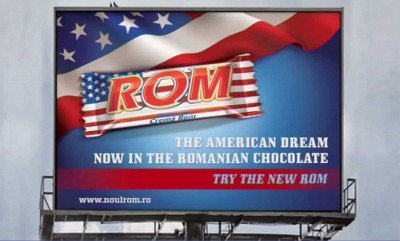 A marketing campaign raising ethical questions? Hard to imagine, isn’t it? Marketing has a long history of pushing the limits of our comfort zones, and that’s great in many cases. It’s good to shake up assumptions and make us reevaluate limitations or boundaries we may have long accepted. Apple did this repeatedly, starting with their iconic 1984 ad, and then afterward with such gems as Think Different. Many others have done it as well, often in support of some very good causes.

But do ad campaigns cross a line when they use our patriotic passions to encourage us to buy their brand? It’s an old marketing concept, and we’ve seen it in everything from selling beer in Canada to Vegemite in Australia. However, a campaign from Romania in 2011 had something different about it. Consumers were “tricked” into thinking that the company would from now on replace the Romanian flag on the bar’s wrapper with an American flag. When the new packaging suddenly appeared, people started to protest, not knowing that their protests were exactly what the campaign was designed to arouse. People were soon demanding the original bar’s wrapping back, not knowing that this was exactly what they were “supposed” to do, as this video shows:

It’s a brilliant campaign in that it gets consumers to significantly ramp up their desire for the product. Still, the Rom campaign crossed the line for me in that it pulled on people’s patriotic passions rather than solely their love of the product itself. Many of the protests undoubtedly centered on the replacement of Romania’s own flag with an American flag, rather than any particular interest in the chocolate bar itself.

The campaign was very successful in many ways, reaching 2/3 of all Romanians, generating 300,000 € in free media coverage, and increasing sales by 79% to become the new market leader. Still, profit alone can be a dangerous indicator of whether or not an action was right. What do you think? Do great results automatically make a campaign great? Did Rom cross an ethical border?

“cherry on the cake”

“By hitting virtually every medium both large and small, we were able to reach a wide audience. Addressing key business leaders at lunch was the cherry on the cake.

“I also want to thank you for your keen insights to the social and business climate I was addressing. It helped me focus my attention on molding my message to the local culture.”