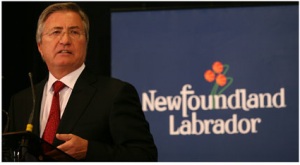 When Danny Williams resigned as Premier of Newfoundland and Labrador, it sent huge shock waves throughout the province and across Canada. In his seven years as Premier he had created and ridden a crest of popularity that no other leader in Canada’s history has ever equaled. He is an impassioned speaker, a never-give-an-inch negotiator, and a personality that fills any room he enters.

Perhaps the most fascinating thing about “Danny” — which he was called in Newfoundland more than he was ever called “Premier Williams” — is his ability to easily slide across chasms that most leaders could never leap. His personal worth is said to be well over a hundred million, yet he is the trusted champion and hero of constituents across all income brackets. He is known as one of the most relentless, hard-nosed fighters anywhere in Canadian politics, yet he is more willing than virtually any other public figure to make fun at himself and have a few laughs.

This was first widely seen a decade ago, before Danny’s election as Premier, when he twice agreed to take the stage for the Celebrity Secrets Variety Show. I had developed the initial concept of the Celebrity Secret shows for Big Brothers Big Sisters, and also helped a little here and there in the planning of each show. They were a great hit, selling out, bringing rave reviews from the audiences, and helping raise significant funds and visibility for the organization. The performers were wonderfully giving and often got into the fun with a level of abandon that surprised us all, winning them many fans. However, Danny’s performances were particular crowd favorites, with no effort spared as he would show up complete with backup singers and full costume. It was only in the past few days that I found a YouTube video of Danny’s second performance; click on the video below to see for yourself one of the world’s first glimpses of Danny Williams the premier showman.
[youtube=http://www.youtube.com/watch?v=KMXPZE5ih8E&w=400&h=300]

Jumping to 2010, Danny has twice grabbed the performance spotlight in recent months to appear in spots with CBC TV’s This Hour Has 22 Minutes. The weekly “news” series features several prominent Newfoundland comedians, with Mark Critch and Danny becoming great sparring partners in the skits that have since become YouTube favorites. Check them both below. The first was aired during Williams’ ongoing feud with the Province of Quebec over a power corridor that Newfoundland and Labrador wanted through Quebec into the power-hungry northeast United States. As you might be able to tell, Danny was not impressed with Quebec’s stand.

The second was put together quickly after the Premier’s surprise resignation just a few weeks ago, in late November. It featured cameo performances by “supreme Newfoundlander and Canadian icon” Gordon Pinsent, as well as Allan Hawco and Sean McGinley of the TV series Republic of Doyle, filmed in St. John’s, the capital of Newfoundland and Labrador.

While it’s easy to laugh along with Danny on these clips, there’s a deeper business lesson that I just have to note. Danny is living proof that we do not have to be devoid of humor or personality in order to be successful. Too much business advice centers around avoiding controversy and being politically correct. “Don’t talk about personal issues, and don’t mention religion or politics.” While I personally have never been as comfortable with confrontation and controversy as Danny clearly is, I am a big believer in being yourself, and not being afraid to let your personality show through. Have a pulse. Laugh and have some fun even while you do your best to excel at your work. Life’s too short to do it any other way.

“knew exactly how to position his Company to enter the market”

“As part of my duties as a Trade Commissioner for the Department of Foreign Affairs I am required to provide services to Canadian companies interested in doing business in my territory. Many companies come to me under-prepared with poorly executed business strategies, and we have to send them back to Canada to re-vamp their plans. This was not the case when working with Lorne Pike and Tacamor.

“Lorne always knew what was happening in the market and knew exactly how to position his Company to enter the market and to take advantage the current market opportunities. It was a pleasure servicing such a business savvied, intelligent, well spoken individual. Lorne Pike should be seen as a “role model” for other Canadian business executives extending their companies operations into this region.”